" There seems to be no end to the “fashionable” information that gets passed around on the internet regarding what makes a better sounding guitar. This includes discussions of the best glues, finishes, popsicle braces, ToneRite, dovetail versus bolt-on neck joints & now truss rods. Unfortunately, much of the information and opinions that are stated as facts are not necessarily so.
I have used carbon fiber truss rods for my ukuleles but would not use them in a guitar neck. I would also not use T bars for the same reason that Martin stopped using them. With these types of truss rods, there is no means to adjust the neck relief except for the difficult means of compression fretting. I have seen enough times the need to adjust the neck to know how important an adjustable truss rod is. Martin’s #1 mission is to sell guitars. I have a close relationship with Martin because I am a Martin dealer and also a member of the Board of Directors of A.S.I.A. I know that Martin has offered custom guitars with fixed neck rods but I don’t know a single luthier at Martin who believes that they produce a better sounding instrument.
For the past few years I have used the Martin 2-way truss rod exclusively in my necks. This new truss rod was introduced a few years ago after extensive testing by Martin and after a favorable approval from their best and most experienced staff luthiers. When properly installed, this truss rod works exceptionally well and in my opinion, contributes nothing either positive or negative to the sound of the guitar. Just as a truss rod should. " 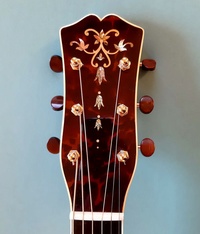 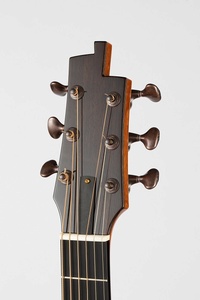