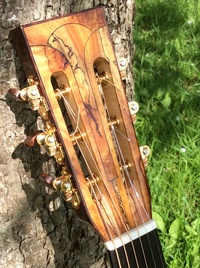 Last year I was extremely fortunate and excited to obtain a stash of high grade Lucky Strike redwood tops from the Carters’ stash. This was an extremely rare find as the wood is highly sought after. Harvested from a naturally storm downed redwood in California, these tops are reknown for their tonal excellence and aesthetic properties.

Craig and Alica Carter, a remarkable husband and wife team were reknown for salvaging naturally fallen redwood trees. Often they would salvage logs from inhospitable terrain and private land to resaw into some of the finest redwood sets ever seen in the lutherie community. ‘Lucky Strike’ is the name Craig gave to a log he thought of as almost, if not truly perfect for guitar tops.

Craig found the Lucky Strike log in north-facing easement in a redwood forest. It fell over a small depression, suspending a segment of the log, allowing it to naturally ‘air dry’. In Autumn of 1993, Craig started to salvage a portion approximately 60 feet long, 3 feet in diameter and the final harvesting was completed by Alicia carter and neighbours in 1997. Craig cut soundboards from the segments as early as 1994.

Hank Mauel, luthier and friend of the Carters says: “Soundboards from this log have been made into fine steel string (including arch top) and classical guitars. Smaller billets have produced mandolins, as well. Stiffness to weight ratio is said to be excellent; grain pattern and coloration generally even, very straight, with lots of “silk.” Sound characteristics combine the warmth of cedar with the clarity and color of spruce with an added “sparkle”. This log set very high standards for redwood soundboards – ones almost impossible to match. Craig cut into over 100 downed logs before he found one – the LS — that met his exacting standards.”